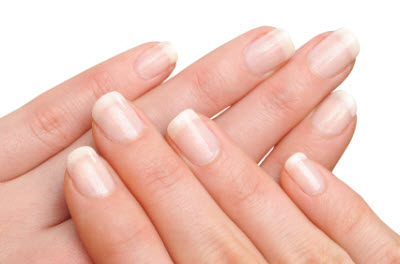 There are several day to day lifestyle tips which could help to improve nail health but in the first instance, it is important to diagnose and hopefully treat systemic an local conditions which could affect the health of the nails. Here are the main ones:

1. Health issues which may effect nails

2. Local damage to the nail beds

Fingernail or toenail abnormalities can tell you a lot about your health. Apart from chemotherapy various medical conditions can effect the nails and if treated can improve the nails. These include fungal and bacterial infections, psoriasis and even thyroid disease. If you have an unexplained significant change in the health of your nails you should visit your GP. Otherwise the following tips may help:

Manicure and clean: Clip any excess nails that might catch on things and tear the nails even more deeply but don’t over trim or pick at the nail beds, which can cause more damage. Clear debris from under the nails and around the nail beds which may contain fungus and bacteria.

Avoid irritants: Identify the behavior or pattern of exposure to irritants that may lead to deterioration in nail health. As an example, after gardening or washing dishes – that had case, a new pair of effective kitchen and gardening gloves would be a good investment. Nail varnish remover can irritate some peoples the nails so try to avoid excess use.

Trauma and cold: Although obvious take care when using hammers and wear protective gloves when doing manual work! Use a good pair of gloves when skiing or other situations where the tips of the fingers get too cold.

Moisturize: Nails can be damaged when they are dry as the keratin bonds in the nails break down causing splits and cracks. Moisturising is very important on a regular basis and particularly after situations which could dry the nails such as after a bath, shower or swim and especially after using nail polish removers. In terms of which balm to use, only one has been tested  in a double blind Randomised Controlled Study. This proved to be highly successful for reducing damage for those receiving chemotherapy but is available to any individual interested in naturally improve nail health – read more

Diet: There is a lot mentioned on health websites about diet and nail health but very little in the scientific literature. Nail stem cells are rapidly dividing and in theory would be susceptible to carcinogens in the diet and environment, the level of inflammation in the body, phytochemicals, vitamin and essential amino acid deficiencies required for healthy keratin formation so the follow healthy dietary considerations may be worthwhile: