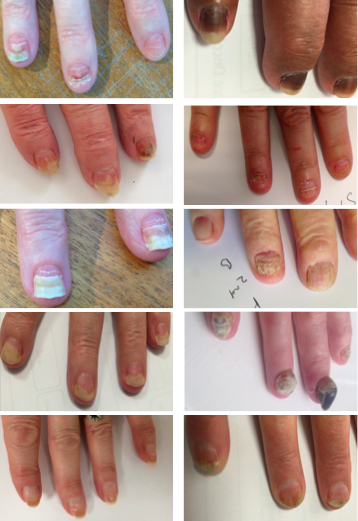 Nails are made by living stem cells and, because they are dividing rapidly, are especially susceptible to chemotherapy4,5,6. As a consequence, disfiguring nail damage is common, especially following regimens containing taxanes used for men and women with breast and prostate cancer. The type and severity of damage is variable, but most intravenous regimens can cause ridges in nails, which correspond to the timings of chemotherapy episodes known as ‘Beau’s lines’. More pronounced chemotherapy nail damage leads to discolouration, brittle nails, acute paronychia, onycholysis and sometimes even complete loss of the nail (see adjacent pictures). This damage is often unsightly and contributes to body image issues during chemotherapy2 . More serious consequences include pain, which can limit activities of daily living, and secondary infection. This is of particular concern when patients are also neutropenic as the nails could be a source of systemic infection. In addition to the killing of rapidly proliferating nail stem cells, damage is also thought to be due to chemotherapy’s anti-angiogenetic and neurogenically mediated inflammatory properties4,5,6,7. If marked, the nails can separate from the bed causing pain, secondary bacterial and fungal infections considerably increasing damage to the nail5,6,7.

How to prevent nail damage during chemotherapy

Firstly it is important to rule out other general and local  medical conditions that could effect the health and appearance of nails, then treat or adopted preventative measures appropriately, if possible: 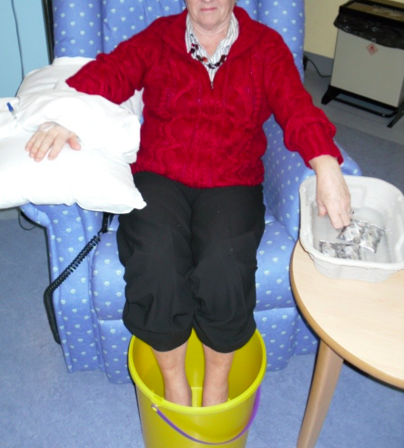 Although strong evidence is lacking attention should be made to the diet – see our nail health page.  Before polybalm was discovered, a variety of local strategies have been advised to patients during chemotherapy including petroleum based moisturising balms, wearing nail varnish and cooling.

Moisturising balms: Many patient advocacy groups advise massaging moisturising balms into the nail bed, based on assumptions that oiling skin around the cuticles could improve compliance, thus preventing splitting which can be a route for infection and damage the nail bed. Although this seems intuitively beneficial there were no studies to support this practice or advise which balms to use and hence one of the rationale for the polybalm study.

Polybalm: Following the significant results of the Polybalm study, the investigational balm, now referred to as PolyBalm has to be regarded as standard of care to prevent nail damage. It is now comercially available, made in a special process which preserves the polyphenol content, and health medicinal properties, of the essential oils1,2,3,4. There were still some patients in the interventional balm arm of the study who suffered from damage. This was seen if patients had preexisting damage where particularly sensitive to the side effects of chemotherapy or had very high doses. In these cases additional measures such as cooling (see below) is still advised.

Nail varnish: Patients are also often advised to wear nail varnish despite the knowledge that nail polish removers dry the nails. Some poeple report this helps but, likewise, there are no published prospective trials to support this practice during chemotherapy, or in an otherwise healthy population.

Cooling the nails: We have previously published a report showing that cooling the nails bed with pots of iced water helps to reduce its severity 7.  Understandably, the practice has never caught on within the confines of a busy chemotherapy unit. Commercially available cooling gloves have now been tested in a number of randomised trials8,9. They did reduce the severity of nails damage but they are not particularly popular among UK chemotherapy nurses as they may cover the veins of the hands and prevent assessment of the patient’s extremities.