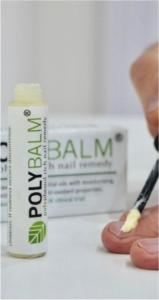 We can ship polybalm anywhere in the world as the certificates and  regulations are recognised internationally.

We endeavour to keep the price as low as possible considering the cost of its rare unique ingredients and scientific evaluation.  It must be sold in a  pack of two as the tubes for the feet and the hands have to be used separate to avoid transfer of fungal spores. Although polybalm has a shelf life of 2 years, unopened, we recommend it is used within 8-12 weeks, if opened, especially for those on chemotherapy.

For best results, polybalm should be used as early as possible from the start of the chemotherapy course until 6-8 weeks after completion. For other nail conditions such as psoriasis, split, weak or shellac damaged nails there is no contraindication for long term use.

From the UK, all packages are sent with standard delivery with Royal Mail – untracked. Apologies but we are currently not able to send a confirmation email that they have been sent. We are working on a solution for this. They should arrive within 2 weeks (hopefully earlier) – if not please email. In the rare event they are lost in the post we are unable to offer a refund. If these terms are unacceptable you may prefer to buy from Amazon – A little more expensive but they do offer more comprehensive customer service.